An encounter with the world’s largest jellyfish, the Lion’s Mane Jellyfish, can certainly make for an intimidating one!

Not only is the Lions Mane jelly the largest of all jellyfish species – but the longest one ever recorded dwarfs the largest known animal on the planet in the blue whale!

Keep on reading for even more fascinating lions mane facts! 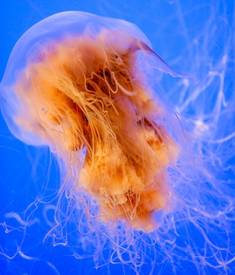 Where Do Lion’s Mane Jellyfish live

With a preference toward colder waters you’ll find that the Lion’s mane jellyfish are mainly found in the northern Atlantic and the northern Pacific Ocean.

They’re also a common sighting in UK waters, and in the Baltic sea and spend their life cycle closer to the oceans surface at a fairly shallow 20meters/60 feet.

Though they spend their lives at the perfect depth for scuba divers to spot them, an encounter with a lion mane jellyfish is not as common as you might think as they mainly inhabit the open ocean as opposed to coastal waters.

The physical appearance of a Lion’s mane jellyfish can vary depending on it’s age and geographic location.

A very young Lion’s mane jelly will often be white or light brown in color, which will then deepen to a more brown/orange/dark yellow as it ages. The most mature Lions mane jellies tend to darken into a dark red.

The bell of this jellyfish is rather flat shaped and can grow very wide. The larger specimens that are found in the northern Atlantic can reach up to 6-8 feet in width, whilst their smaller Southern counterparts typically only reach 1-2 feet.

The bell of the jelly is divided into eight lobes, and from each of these lobes are between 70-150 tentacles – That’s a combined total of up to 1200 tentacles!

The frilly oral arms under the bell form a large mass and are often described as resembling that of a Lion’s mane (hence where this jellyfish gets its name).

The stinging cells found on it’s oral arms and the long stinging tentacles (described as being very sticky) that trail from the Lion’s mane jellyfish pack a powerful sting for their prey. Then once immobilized by the poisonous toxins, their prey will be transported up towards the jellyfish’s mouth.

The Lion’s mane jellyfish’s tentacles can often reach up to 100 feet in length (30 meters), so it’s best to give this jelly a wide berth if you come across one! Especially as their long thin tentacles can be difficult to spot.

The largest Lion’s mane jellyfish recorded had a bell diameter of 7 feet, and tentacles that were 120 feet in length!

To humans, the lion’s mane jellyfish sting is not especially dangerous. It does still pack a powerful sting that can be quite painful, but it is not one that is generally considered deadly (unlike the deadly box jelly!).

The painful sting of a Lion’s mane jellyfish will cause pain and irritation to the skin. The sting could be more severe (and dangerous) for unlucky individuals who exhibit an allergic reaction to the sting.

The below video shows footage of the lion’s mane jelly feasting on other moon jellies, and one being consumed by a wall of anemone’s!

I hope you enjoyed this article on the fascinating Lion’s Mane Jellyfish. If so then you may also be interested in reading: 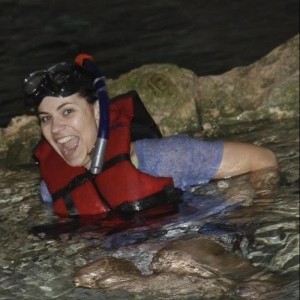 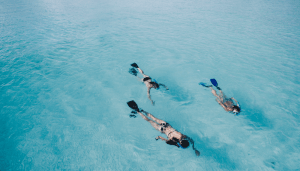 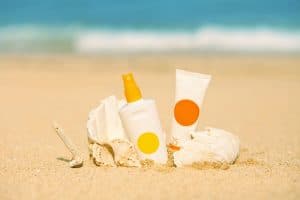 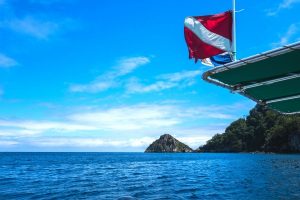 diver down flags – Everything You Need To Know 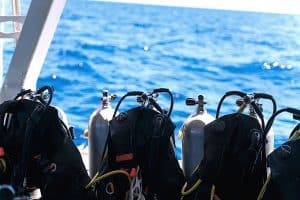